Into the Wild - Soft Cover 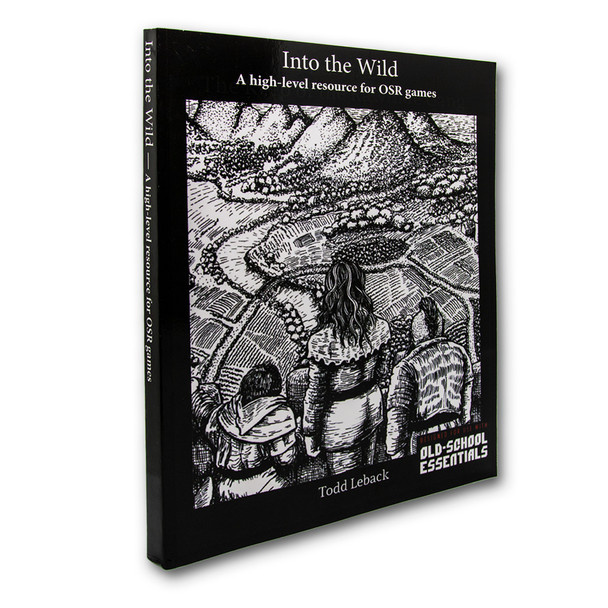 Into the Wild - Soft Cover

This listing is for the SOFTCOVER version of the book.

Into the Wild. Into the Wild is written for Old School Essentials but can be easily adapted for use with any OSR-style game. It combines and expands on six books by Third Kingdom Games: Classing up the Joint, Domain Building, Hexcrawl Basics, Random Weather Generation, OSR Expanded Classes, and Wealth by NPC level.

Designed to be used alone or as a companion book to Filling in the Blanks and a Guide to Thieves' Guilds, Into the Wild provides guidance for high level play. From exploring the wilderness to founding a domain, creating new classes for OSR games, and more. All of the artwork was commisioned for the book. The rules from the aforementioned six books have been revised and integrated into a coherent whole, with plenty of examples of how it works in play. Additionally, Into the Wild contains:

*A simple mass combat system designed to be used to resolve everything from large-scale pitched battles to large encounters in the wilderness for when you don't want to roll one hundred attack rolls.

*Two pages of unit tokens for use with 1" battlemats and the mass combat system.

*Example settlements and strongholds that are blank to be filled in by the Referee and used as needed.

MSRP:
Now: $14.99
Was:
Dungeon Discoveries are fun card decks that help roleplaying game masters create immersive details on the spot. The system neutral results are flavorful and easy to use. With near limitless...
NRD-Lore-DD-FWV

Into the Wild - Hard Cover

MSRP:
Now: $48.99
Was:
This listing is for the HARDCOVER version of the book.   Into the Wild. Into the Wild is written for Old School Essentials but can be easily adapted for use with any OSR-style game. It...
OSE-002-H

MSRP:
Now: $14.00
Was:
A Guide to Thieves' Guilds. This book provides an abstract system for running thieves' guilds in any OSR-style game. While written for Old School Essentials, the system contained is easily...
OSE-003-S

Filling in the Blanks - Soft Cover

MSRP:
Now: $23.99
Was:
This listing is for the SOFTCOVER version of the book. Filling in the Blanks is a guide to populating hexes with lairs and features to use in fantasy role-playing games. While written...
OSE-004-S

MSRP:
Now: $7.95
Was:
The follow-up hex to Part 1 of the Populated Hex Monthly Release, this book contains a dungeon located under the ruins of the ancient burial complex. Once used by the Crocodile Kings to prepare...
OSE-PHM-03

MSRP:
Now: $7.95
Was:
The first issue in the Populated Hexes Monthly series features a rocky ocean-side desert, containing a dragonne lair and a partially flooded cave system containing a lost shrine. Can easily be...
OSE-PHM-01

MSRP:
Now: $24.99
Was:
Bees: The Secret Kingdom is a unique card game in which players will choose between creating a honey card or playing a flower card to get pollen tokens. Bees has two modes. The first is for families...
VRGBSK

MSRP:
Now: $35.00
Was:
Welcome to the USA of the 50s - the era of oversized cars, rock and roll and ... alien activity! In order to prevent a mass panic, the president has ordered that all evidence of the existence of...
MSP-001

MSRP:
Now: $29.99
Was:
Control monsters to steal candies! In Kingdom's Candy: Monsters, you are a villain eager to accumulate candies. You use monsters as servants to help you in your mission, but if you don't feed...
GMG007